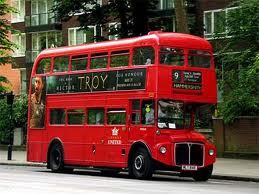 There are 8,000 buses in London! They are red. They carry about six million passengers every weekday. There are over 700 different routes. In a year, the buses cover about 45 million kilometres.

A London bus has two floors. It is called a double-decker bus. This is because the floors on buses and ship! Cue called decks.

Tourists love to London from are bus. You can see the sights better from the Top decks. Look out a got good view of Buckingham palace, the tower of London the houses of parliament, Piccadilly circus…
LONDON BY BUS

The bus is a good solution to get around London these days. Top reduce traffic problems, now you want to central London in your car, you have to pay a toll. So, if you leave your car on the outskirts, the tube or the bus is the answer!

-No te preocupes mama. No le voy a hacer nada.